I know it is gross. This is the new OrganicNoise OSL map from 3dsMax 2023.3. It makes organic-looking noise! Like the above image.
It is so cool because…

I renderers all 28 presets as animation. Check it out. Don’t forget to music on! 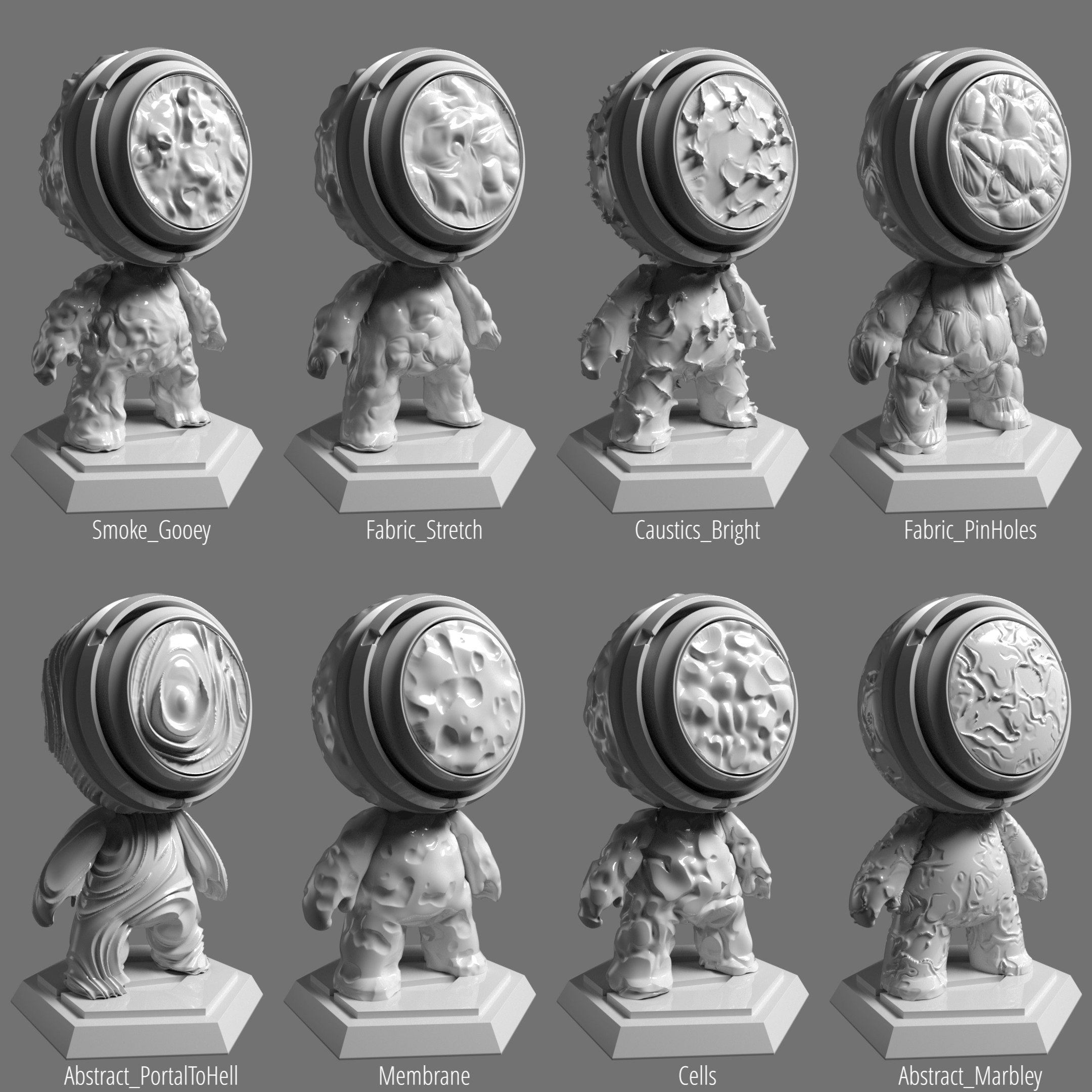 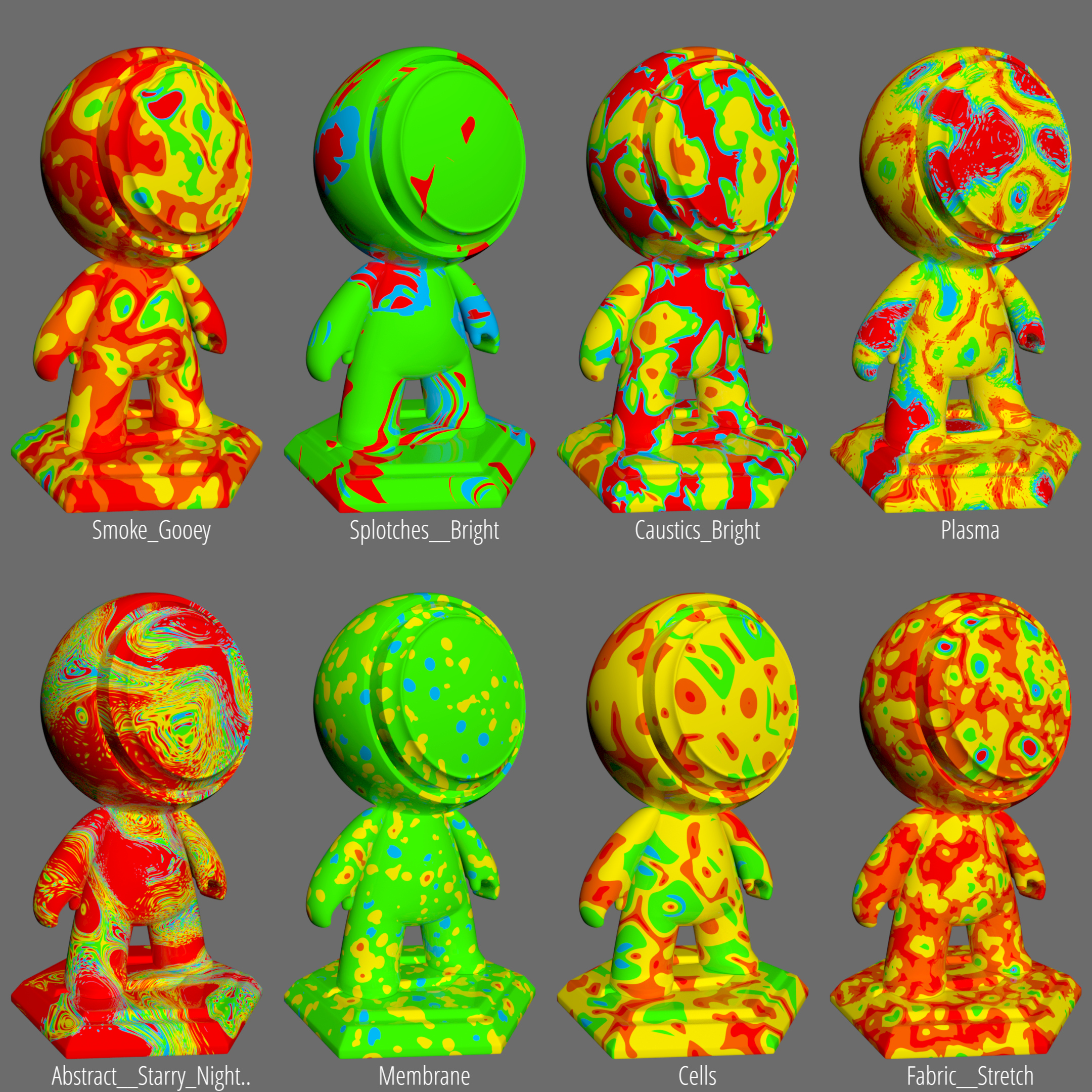 It has been only a little bit more than a month since we got big USD updates. But, this is December, the month of the last PU of the year.

The best part of new #3dsMax 2023.3 Organic Noise is that it comes with 28 ready-to-use presets. It is like having a holiday gift basket!
I rendered all 28 presets with Phase/Scale animation and even put some background music. It is interesting to see that the scale adds even more variations.

When #3dsMax 2023.2 Array modifier was released, I had to connect a few OSL nodes to randomize maps per clone. Now you can just use a single UVWRandomizer OSL map for the randomization part

#3dsMax core optimization effort never stops. This time Poly to Mesh conversions performance has been improved across 3dsMax. If you have a stack with lots of channels and jump around Poly/Mesh a lot, you will feel the difference.

3dsMax USD 0.3 has been released. Here is the highlights.

These are some Array modifier sample max files from me and other beta testers. I’ll eventually post something ti explain some of these files. But, if you are impatient, just open these files and figure it out! Enjoy! 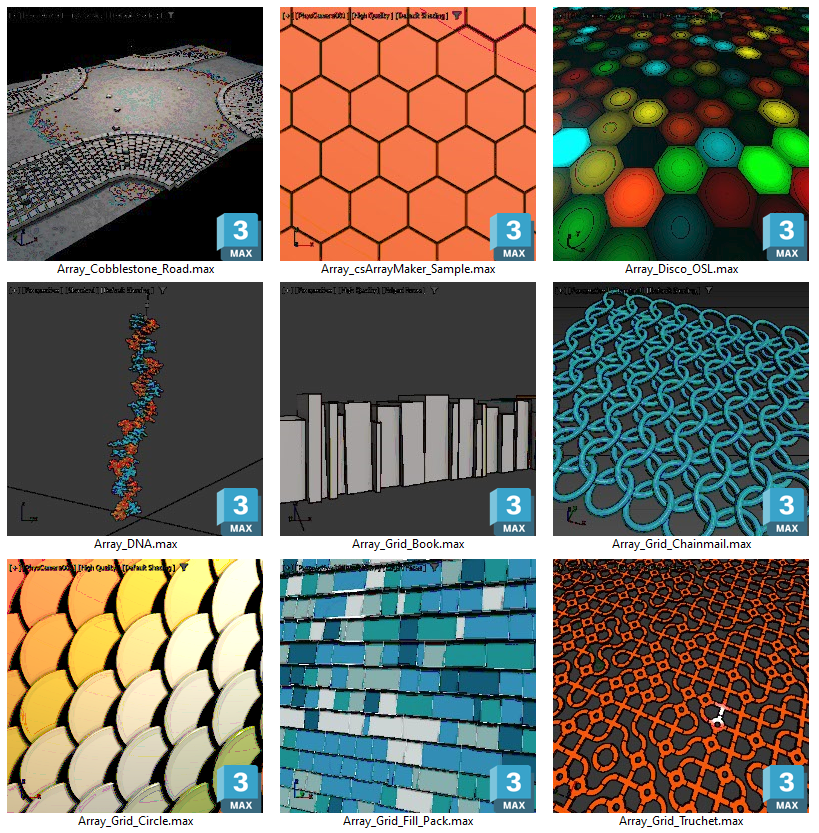 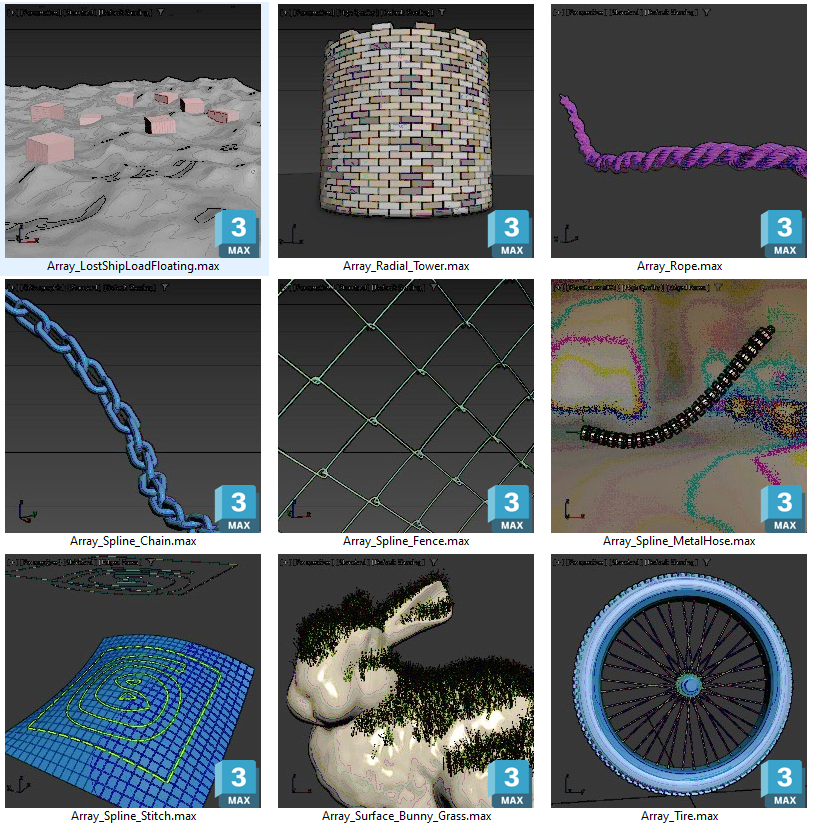 The Scene Converter contains a new preset called “PhysicalToGLTF” that allows you to easily convert all physical materials in a scene to glTF materials.

Improving/optimizing performance #3dsMax has been one of the big focus for a while. #3dsMax 2023.1 has another round of big performance boost. Especially these updates are for animators.

3dsMax is known for the best spline tool on the market. Yet it has gotten even better!

Zoom Extents On Isolate (ZEOI) is now persistent from session to session (in 3ds Max.ini). Default value of ZEOI is set to off, means do not zoom extents on isolation.

A new button is available called “Capture” which copies all of the existing vertex colors that exist under the current Vertex Paint modifier into this level. This will allow you to blur and work with the existing data easier.

Improved playback speed with animated background if the source image is in sRGB or gamma 2.2. It is 2x-3x faster.
Improved performance of Merge dialog when dealing with large number of nodes. 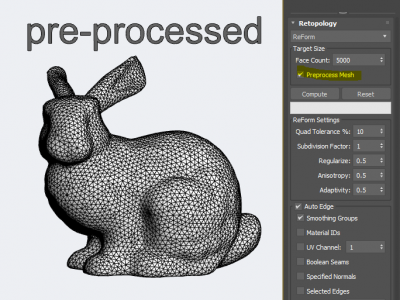 One of the main update is “Preprocess Mesh” checkbox(On by default). If this option is on, Retopology modifier will preprocess/remesh to make a evenly triangulated mesh first before retopolizing the mesh.

Reform really love this preprocessed mesh which makes the retopology process really really faster. Especially, when you go from very high poly count to low count target. The  above bunny has almost 70k triangles. When I retopo to 5k without preprocessing. It took 34 seconds. With preprocess, it took only 4.7 second.

Second, because the preprocess smooth out small details(or noises), it produce a better edge flow as you can see from the following image. Of course, if you want to keep all the details as much as possible, you might want to turn off preprocess. 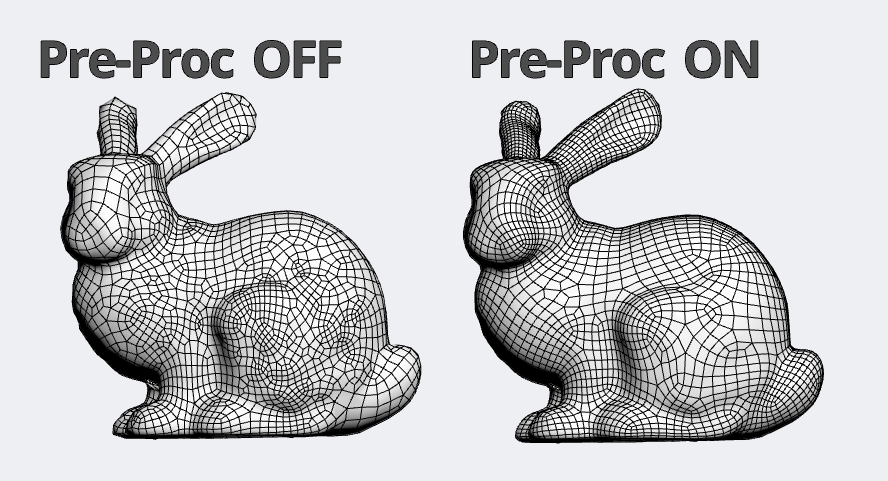 Another important benefits of the preprocess is that it actually allow to retopo a highly detailed mesh to a very low target. Reform tend to try to keep all the details as much as possible. Because of this, Reform sometimes just fail or give you a result that has a lot more poly than you wanted. Preprocess solves this issue.

Here are some examples of retopo with preprocess on. I have Ryzen 2700X. Both models were sliced half and reassembled with Symmetry modifier.

3dsMax mesh has more data than just vertex and faces such as UV, normal, smoothing group and material id. Now Retopology modifier keeps any of this data which you set as “Auto Edge” while preprocessing and processing. For example, if you turn on Auto Edge > UV Channel, it will create edges along the uv seams and re-project uv data to the new mesh.

I picked a Megascan asset and retopoed from high res model to 5000 poly target which is same as their LOD0 mesh. The left one is Retopoloigy modifier result. It took 26s with the default setting. 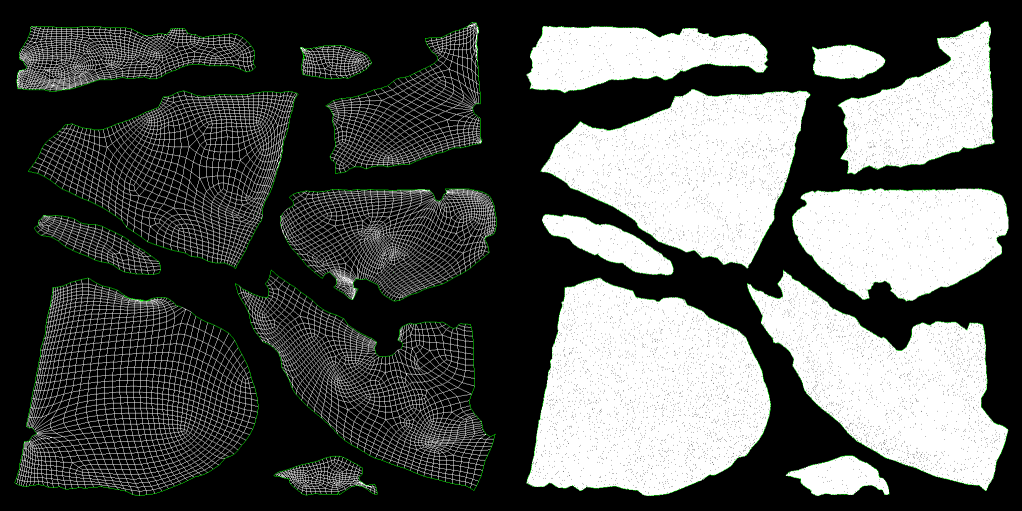 But, Let’s talk a little but more about Auto Edge especially for uv seams as Auto Edge.

I have scanned model. The green line is th euv seams. Do you see all those tiny uv elements? If I turn on Auto Edge with UV Seams, Retopology modifier will try really hard to keep all of them, which means retopo will likely fail unless you set the target really really big. So, please check your UV if your retopo process fails with Auto Edge/UV seam. 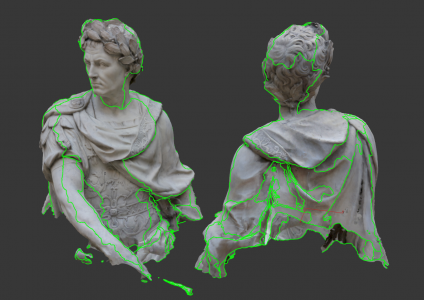 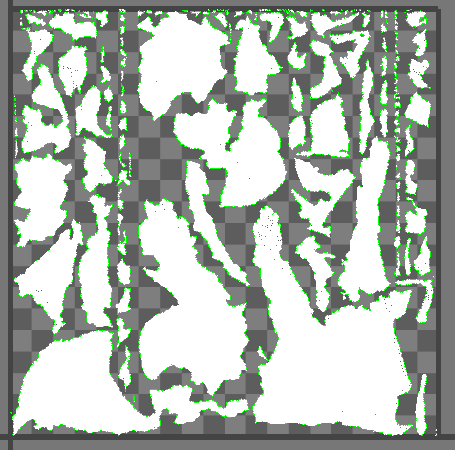 To solve this issue, you will likely create a new uv with less elements and bake maps to the new uv. This is the result after I created new seam abd used BTT to transfer the texture to new uv. It took 104 seconds to retopo to 25000. I’ll have a new post dedicated to this process in the future. 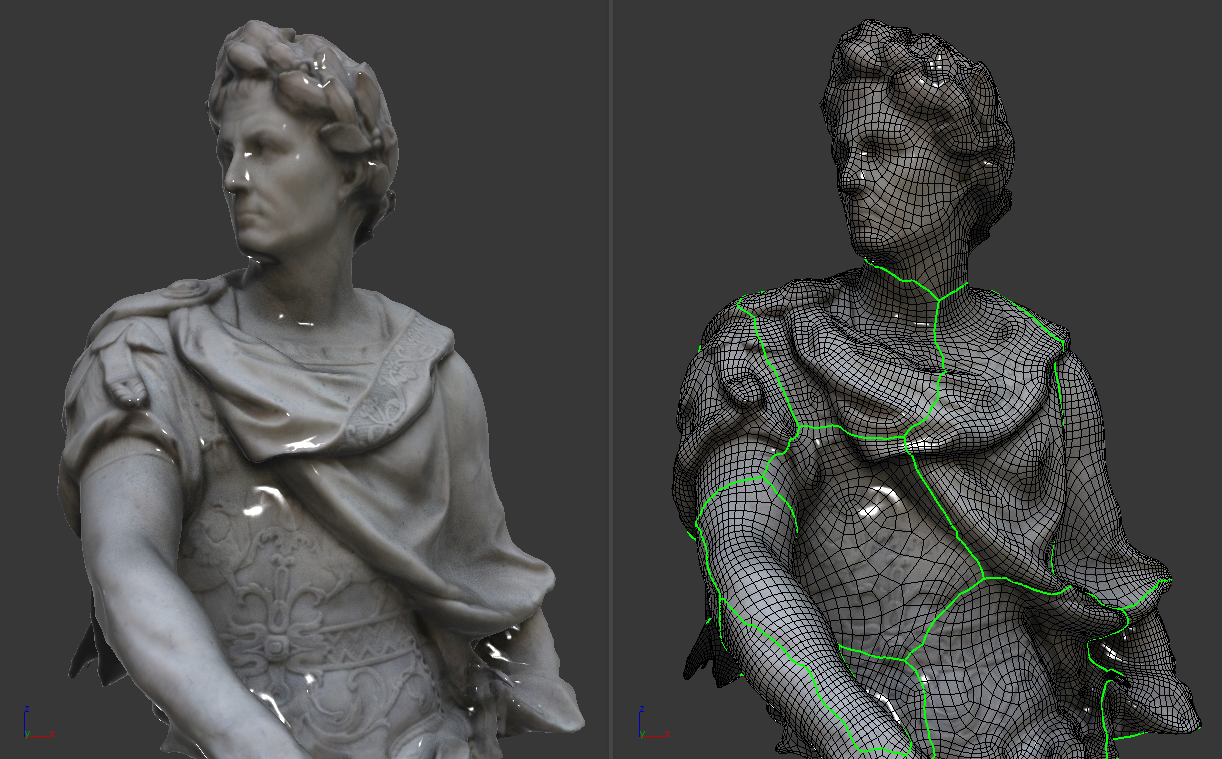 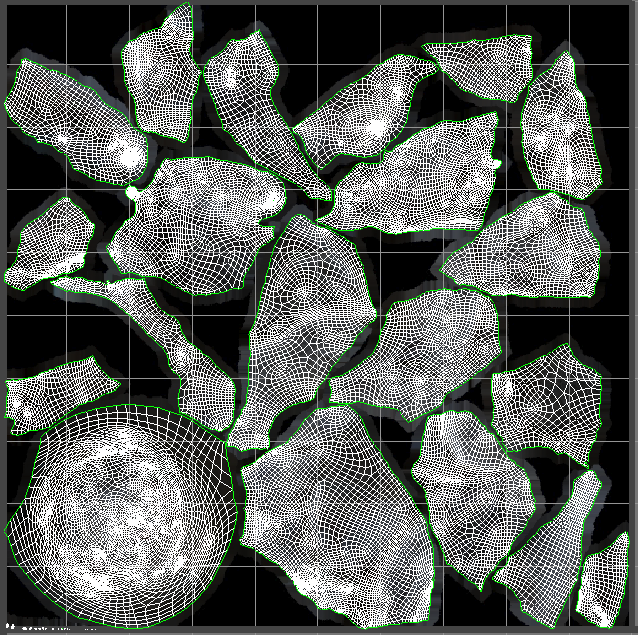 Here is some images of retopolized Megascan assets. Most of them was just one click. 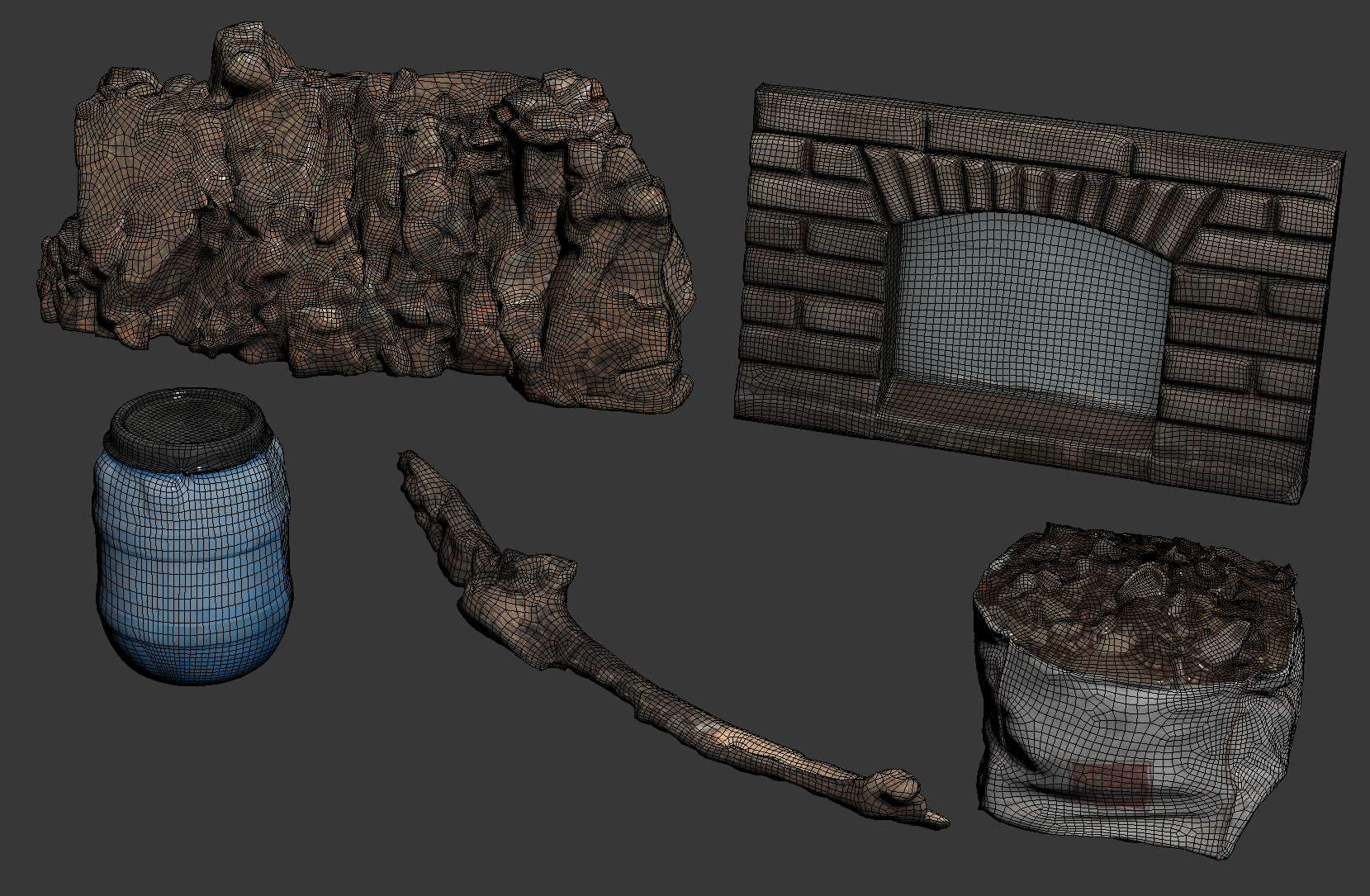 Now you can choose to output either Retopology mesh or Remeshed Mesh(Preprocessed mesh) to the stack.

As you can see, remeshed mesh has extremely simulation friendly topology. As of now, you can’t just get remeshed mesh. But, remesh process usually a few seconds. You can just press ESC when retopology process starts to get only remeshed mesh.

That’s it for today!

The pipeline integration which was introduced in 2022.3 has a small but very very important update in 3dsMax 2023,

In a not shell, you can set all pipeline integration folders per 3dsMax version and even for each PUs.

For example, this is my ADSK_3DSMAX_PLUGINS_ADDON_DIR setup.

When 3dsMax launches, it loads plugins from D:\PROJECT\_maxDefault\plugin_2023

will make your startup script path to be
\\server\3dsMax\2023.0\scripts\startup

With this new edition, the following article need to be updated. You don’t have to use batch file or script anymore.

Why it is important? Because this is the folder where MCG goes.
This is the default MCG installation location.
C:\Users\[username]\Autodesk\3ds Max 2023\User Tools\Max Creation Graph\Packages

After I set this up one time, I will not need to set MCG folder forever and ever. Update? re-install? new version? PR? I don’t need to do anything to get my MCG back.

ADSK_3DSMAX_AUTOBACKUP_DIR – Defines the path used by Autobackup to save files.

ADSK_3DSMAX_ROOT – An environment variable defined by the 3ds Max process that contains the directory from which the current 3dsmax.exe program is running, regardless of where 3ds Max is installed. Only defined when auto-tokenization is enabled.

3dsMax 2023 – Occlude selection mode improvement
Further optimizations have been made to the Occlude Selected functionality. The selection performance and accuracy has been greatly improved.

3dsMax 2023 – FBX Maya Interop
Improved FBX so now it supports the physical material and you can send to/from Maya without much loss of data.

3dsMax 2023 – Volume Display API
This new API simplifies displaying a volume in the viewport when a plugin provides the voxels data, positions and display options. MaxToA Volume object in MAXtoA 5.2.0 is using this API.

This is the second part of how to manage tools series, Plugins. I’m sure most 3dsMax users know about the plugin,ini file. When 3dsMax starts, it looks for the following 2 plugin,ini files.

This is a usual ini file with sections and keys and values like this.

You can edit one of the above files with a text editor to add your own plugins folder or use Customize menu > Customize Users and System Paths dialog > 3rd Party Plug-Ins tab.

Usually a commercial plugin would have an installer to take care this for users. Then, users would make a plugins folder and throw all free plugin there and add the path to plugin.ini. Or, some still just throw everything in C:\Program Files\Autodesk\3ds Max 2022\Plugins folder. If your studio has TDs or IT department, they probably already have their own way to do it. Also you can specify a plugin,ini to use via command line option -p while launching 3dsMax

But, there are also 2 not-so-well-known ways of managing plugins to know.

With 3dsMax 2023 updates, the above issue has been addressed. Please check the new post here.

Therefore, you need to set env var only for a session instead of the whole system. You can do this by using a batch file or Python script to run 3dsMax. If you have a Python launcher, you probably wouldn’t need a tutorial from me. Here is a sample batch file for “artists”. A good thing about this sample is that it doesn’t leave the command shell after 3dsMax started.

“SET” command is the command to set env var in a batch file.

As you can see, this allows you to define the combination of plugins dynamically while launching 3dsMax easily. Imagine you need different versions of VRay, ThinkingParticles per project. Before the pipeline integration, you would need to build a plugin.ini per project and load. Now, you can just add directories directly in the launcher script.

This is it for plugins! But, the potential of the pipeline integration doesn’t end here. WIth new env var controls and token support in various ini. You can actually install each PUs side by side now like 3dsMax 2022.1, 2022.2, 2022,3. You can even install 3dsMax in a network folder and load from there. Sure, you need to figure out how exactly execute this for your studio. But, the technical foundation is there. So, try it!

Do you want to improve your pipeline? renderStacks could be the start.